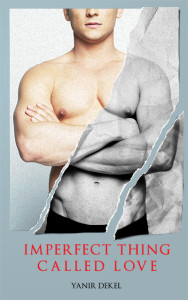 A gay guy who had just broke up with his boyfriend and started going to therapy, deals with being alone, with body image, games in dating, and feelings that often related to the demanding stereotypes of the “gay world.” With a need to seem attractive in the market of single guys, he learns to accept himself the way he is. Imperfect.

Imperfect Thing Called Love is a journey of a guy on his first year going to therapy after breaking up with his boyfriend. A self-help book in a disguise of a memoir.